You are here: Home / Barry Friedman

Barry is the third-generation leader of Friedman’s Home Improvement, celebrating over 70 years in business committed to delivering the human side of home improvement. In 1970, the 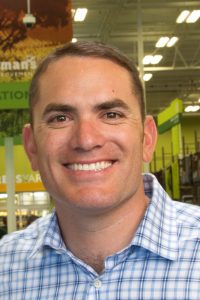 Friedman’s built Sonoma County’s largest hardware and building supply store — Friedman Bros. — on Santa Rosa Avenue, south of Santa Rosa. Bill Friedman became president and CEO when Benny began to ease into retirement in 1985. With Benny’s retirement, his kid brother, Harry, became chairman of the board. Bill became chairman as well as president/CEO in 1999 when Harry, now 84, retired and sold his interest in the company to Bill.

Under Bill’s leadership, the enterprise expanded with the opening of a store in Sonoma in 1993 and in Ukiah in 1996. Today, Friedman’s employs over 600 Team Members at it stores located in Santa Rosa, Petaluma, Sonoma and Ukiah.

Barry was born in Santa Rosa in 1978, he first went to work at Friedman Bros. at age 8, bagging and getting carts during summer vacation. He was the captain of the football team at Cardinal Newman High and then at Lewis & amp; Clark College in Portland. He recalls that as a young man he “tried to imagine myself not being part of the (Friedman Bros.) organization, what that would look like.” But, he said, by 2004, three years after he graduated with a business degree, he found himself strongly drawn to the family business. He went to work learning every phase of the operation.

In 2008, Barry’s father promoted him to a management position. In 2009, he became vice president of operations, with all three store managers reporting to him. Taking over the reins in 2013, Barry has continued his family legacy of putting his employees and community first. Barry continues to honor the family’s tradition of being both a supporter and active participant in the local community.

Barry and his wife Heidi live in Santa Rosa with their four children.