You are here: Home / Judy Sakaki 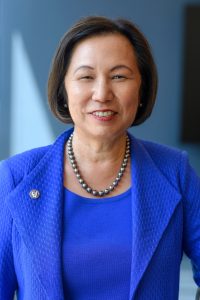 Dr. Judy K. Sakaki became Sonoma State University’s seventh president on July 1, 2016.  Sonoma State is one of 23 campuses within the California State University, the largest public university system in the country.  A pioneer in her industry as the first Japanese-American woman in the nation to lead a four-year college or university.

Under President Sakaki’s leadership, Sonoma State: 1) Received federal designation as a Hispanic-Serving Institution; 2) Increased its four-year graduation rate for undergraduates by 5 percent to nearly 35 percent; 3) Increased its two-year graduation rate for transfer students by nearly 7 percent to 62.2 percent. Sonoma State is now ranked No. 1 out of the 23 CSU campuses for the highest graduation rate for transfer students; and 4) Successfully completed “Building Our Future @ SSU Strategic Plan 2025.”  Strategic priorities include: student success, academic excellence and innovation, and leadership cultivation, all with an emphasis on making a transformative impact on the lives of those on campus and in the community.

Dr. Sakaki is the recipient of numerous community and leadership awards. She was recognized as President of the Year in 2017 by the California State Student Association representing the 480,000 students of the CSU.  She was the Joint Asian and Pacific Islander (API) Legislative Caucus’ honoree for Excellence in Education in 2020.  She also received the Student Affairs Administrators in Higher Education, Region VI President’s Award in 2018. Dr. Sakaki is a former American Council on Education Fellow, an Executive Fellow of the California State University, a senior Fellow of the American Leadership Forum, and an American Association of State Colleges and Universities’ Millennium Leader. She was a founding member of Asian Pacific Americans in Higher Education and was selected by the North Bay Business Journal for the Women in Business award in 2017.  Dr. Sakaki served on Governor Newsom’s California Higher Education Recovery Equity Taskforce, is currently on the Public Policy Institute of California Higher Education Advisory Council.  And is a Western Association of Schools and Colleges Commissioner

Dr. Sakaki grew up in Oakland, California and was a first-generation college student.  She is a product of public education.  She was a single mother of two sons-one is now a public high school English teacher and the other a family medicine physician.  She earned her B.A. in Human Development, her M.S. in Educational Psychology both from CSU East Bay and her Ph.D. in Education from the University of California, Berkeley. She serves on numerous local and national boards and speaks about leadership and resilience having been a victim of the Tubbs Fire, which destroyed more than 5,000 homes, in Sonoma County in October 2017.