You are here: Home / Fred Vela 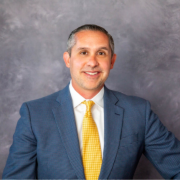 Fred Vela is Executive Director for the Wells Fargo San Francisco North Bay middle market banking group. Based in Santa Rosa and San Francisco, and covering the region from mid Peninsula to the Oregon border, Fred and his team provide companies with
local service and decision-making, including lending, cash management, capital markets, and other specialty banking services.

Fred began his banking career in 2000 with Comerica Bank, working in the High Tech and Middle Market groups. In 2004 Fred joined Bank of the West’s Commercial Bank Group and from there the Risk, Strategy and Administration team charged with developing the group’s risk management functions. Fred joined Wells Fargo in June 2011 in a credit execution role and has held a variety of roles since that time.

Fred has a B.S. in finance from Cal Poly San Luis Obispo and an M.A. in international relations and business administration from San Francisco State.

Fred lives in Novato with his wife Kristen and daughters Elleree and Hadlee.